Hours: Model tours and site visits are by appointment only 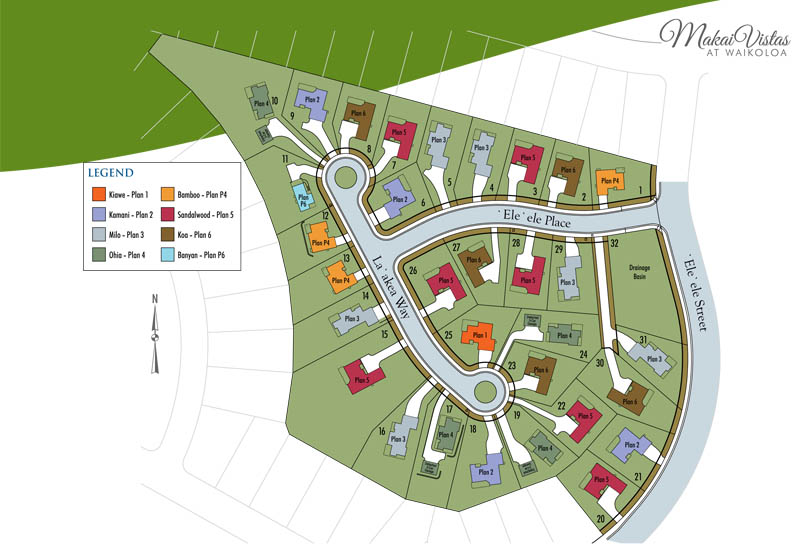 The site plan is not intended as a legal description of the property or to constitute an undertaking by any party to develop the subject property as shown. It is for general informational purposes only and details shown may vary significantly depending upon actual field conditions and other factors.

The Island of Hawaii, more commonly known as the Big Island, is the most geographically diverse of the Hawaiian Islands. You can find 11 of the world's 13 climate zones on this island, ranging from tropical rainforest to periglacial.

The Big Island was formed by five volcanoes. Two of the five remain active today, Mauna Loa and Kilauea, the most active volcano in the world which has erupted almost non-stop since 1983. Mauna Kea, the largest volcano, is dormant. Kohala is a smaller extinct volcano on the island's northwestern tip and Kualalai is on the west coast.

Waikoloa, on West Hawaii's Kohala Coast, is located at the base of Mauna Kea, about 20 minutes from Kailua-Kona. A resort town and master-planned community, it is known for grand resorts, golf courses and beaches. Kailua-Kona and Hilo are the Big Island's two major cities, each with its own airport.

Kailua-Kona, which is known locally as "Kona", is warm and sunny. Historically, Hawaiian royalty lived here because of the ideal weather. The first missionaries who arrived in Hawaii built homes and churches here. Today Kailua-Kona is a major seaport for the island. Hilo, on the east coast, is cooler and has historically been the center for trade.

Hilo continues to be a primary center for business and shopping and is a popular tourist destination.

Towne Realty began building in Hawaii in the mid-1970's, under Towne Development of Hawaii, Inc. (Towne Hawaii), and developed projects primarily for the federal government. These projects consisted of classified communications facilities in Haiku and Barber's Point along with housing projects at the Kaneohe Marine Corps Air Station, Aliamanu Crater, Schofield and Hickam Air Force Base.

Towne quickly expanded, and have completed the following residential projects:

Developer reserves the right to modify floor plans, elevations, specifications, features and prices without prior notice. Square footage and room sizes are approximate. Exterior treatments, window locations and room configurations may vary with elevation. Exterior elevation colors may vary. Some decorating treatments in and around the model homes may not be included in the list price and are for display purposes only. All renderings, floor plans, and rooms are artistic conceptions, in some cases virtually staged, and are not intended to be an actual depiction of the rooms, buildings, fencing, driveways or landscaping being represented. ©2023 Homes by Towne

Every effort is made to include accurate and up to date information in this website, but no warranties or representations are made as to its complete accuracy. No liability or responsibility for any errors or omissions in the content or operation of this website is assumed. All information should be verified with the sales associate at the specific community from which the information is desired. ©2023 Homes by Towne